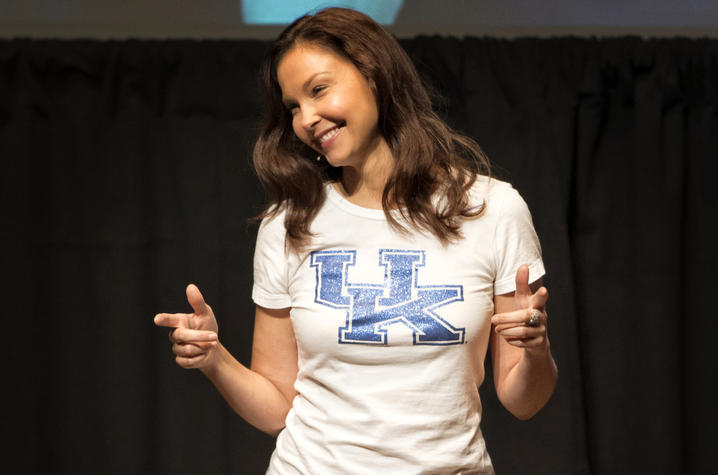 Watch a video above with "the silence breakers" created by Time magazine.

University of Kentucky graduate Ashley Judd is among the group of “silence breakers” that has been named Time magazine's Person of the Year for their efforts to shine a spotlight on sexual misconduct in America.

“The galvanizing actions of the women on our cover … along with those of hundreds of others, and of many men as well, have unleashed one of the highest-velocity shifts in our culture since the 1960s,” said Time Editor-in-chief Edward Felsenthal.

An activist from an early age, Judd has worked internationally with nongovernmental organizations, grassroots organizations, governments and supranational bodies since 2004. Presently, she serves as Global Goodwill Ambassador for the United Nations Population Fund (UNFPA), is the Global Ambassador for Population Services International and for Polaris Project. Through UNFPA she has recently traveled to Jordan, Ukraine, Turkey and India. She serves on the advisory boards of International Center for Research on Women, Apne Aap Women Worldwide and Demand Abolition. She is chairperson of the Women’s Media Center Speech Project: Curbing Abuse, Expanding Freedom.

After graduating from UK with a French degree, Judd earned a master’s degree in public administration in 2010 from Harvard’s Kennedy School of Government. Her paper, "Gender Violence, Law and Social Justice," won the Dean’s Scholar Award at Harvard Law School. She frequently serves as an expert panelist at international conferences, is a sought after public speaker and is a widely published op-ed author with a diverse and unique social media presence. Her book, "All That Is Bitter & Sweet," detailing her visits to grassroots programs in 13 countries, was a New York Times bestseller. Judd is also an actor on film and stage. She has been nominated for several Golden Globe and Emmy awards.

Last Friday, Judd delivered the UK College of Social Work’s Irma Sarett Rosenstein Lecture, named for a Lexington social worker and social justice advocate. In addition to her lecture, the UK College of Arts and Sciences announced the creation of the Ashley T. Judd Distinguished Graduate Fellowship in the Office for Policy Studies on Violence Against Women at the event.

UK is the University for Kentucky. At UK, we are educating more students, treating more patients with complex illnesses and conducting more research and service than at any time in our 150-year history. To read more about the UK story and how you can support continued investment in your university and the Commonwealth, go to: uky.edu/uk4ky. #uk4ky #seeblue